skip to main | skip to sidebar

The Unauthorised History of the K & DR

The K&DR is one of the ‘two footers’, the first of which was the Sandy River Railroad, chartered in March 1879.

Construction began on the SRRR from an interchange with the standard gauge Maine Central at . The first eighteen miles to Phillips opened on November 20, 1879. The success of the SRRR prompted imitation and expansion, firstly with the charter of the Franklin and Megantic Railroad in 1883. The F&M route was surveyed between Strong on the , and Kingfield, some fifteen miles to the north-east. Construction began the following year and the line was soon completed. Plagued by 5 percent grades, rough track, and heavy winter snows, the F&M was less successful than the SRRR, but despite this, in 1894 a third two-footer, the Kingfield and Dead River Railroad extended the route another nine miles to Carrabasset, with a further six mile extension to Bigelow being completed in 1900. The original K&DR was a paper road only, and owned no equipment, but was in effect operated as an extension to the F&M, with which it shared common ownership.

Meanwhile, the Phillips and Rangeley Railroad had been chartered in 1889 to form another extension of the line, twenty eight miles from Phillips, north-west to Rangeley. The P&R was built to exploit a large stand of virgin spruce and also to serve resorts on . The line was opened to its terminus at the Marbles Hotel, just beyond Rangeley, in July 1891.The new railroad was moderately successful; not as profitable as the Sandy River, but more so than the F&M. The P&R also spawned two subsidiary lines, the Madrid Railroad, which like the K&DR was a paper road, and the Eustis Railroad, which did own its own locomotives and rolling stock. Both lines were operationally regarded as being branches off the P&R

In 1908, there was a major consolidation of the two footers: The P&R, F&M & SRRR and subsidiaries were brought together to form the and Rangeley Lakes Railroad system. The combined company enjoyed several profitable years of operation, until the Maine Central obtained control in 1911. A number of branches were abandoned as lumbering declined: the two mile branch to Mt.Abram had already been abandoned in 1905; another two mile line to Alder Stream was pulled up in 1916; and four miles to Langtown was likewise abandoned in 1919.

What is not so well documented [OK, so I made this bit up] is that in 1912, the MEC attempted to close down the Kingfield to Bigelow line. Pressure from lumbering interests in the area, notably mill owners Maxcey & Wing saw ownership of the old K&DR reverting to the lumber barons who initially chartered the line, and for whom the supply of timber to their mills at and near Kingfield, was totally reliant on the railroad.

After some wrangling with the MEC, in 1913 the K&DR entered into an interchange agreement with the SR&RL which saw handoff of passenger traffic between the two lines at Kingfield, and traffic rights allowing SR&RL engines and freight traffic over the K&DR in exchange for the lease of SR&RL equipment by the K&DR as needed.

During this period, the K&DR started to acquire some equipment of its own. Pride of the fleet was locomotive - #7, a Forney 2-4-4 built to the same plan as WW&F #7. Rolling stock came from a number of sources – castoffs from the SR&RL, WW&F, Monson & B&H as well as a number purpose built for the K&DR.

World War One brought brisk business to the SR&RL, with the pulpwood accounting for most of the traffic. The K&DR also prospered on the coat-tails of its larger brother. Today, in 1919, traffic levels on both roads are at the highest level ever recorded, and the future is looking bright for the continued operation of both the SR&RL & K&DR. 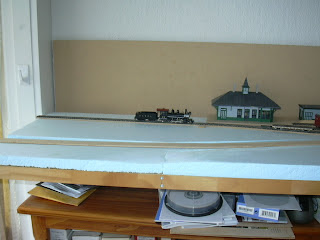 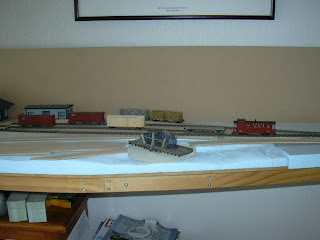 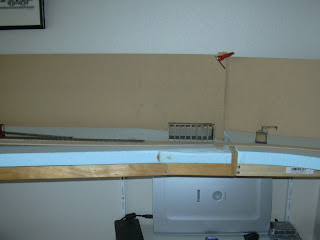 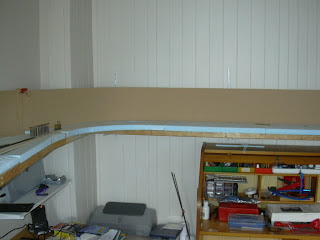 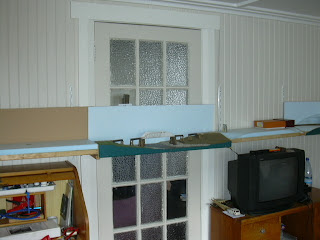 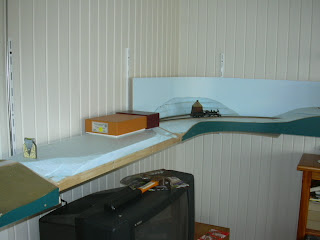 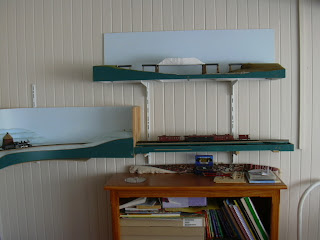 Staging, and the Salem Stream bridge section in storage position above... 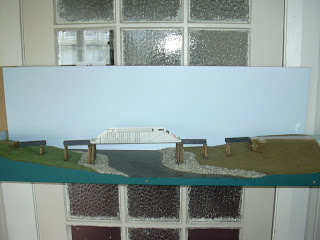 ...and ready for action 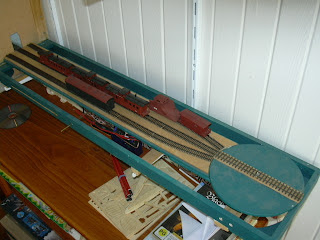 Bird's eye view of staging - 3 track sector plate, with turntable at the far end.
Posted by Simon at 8:59 PM No comments: 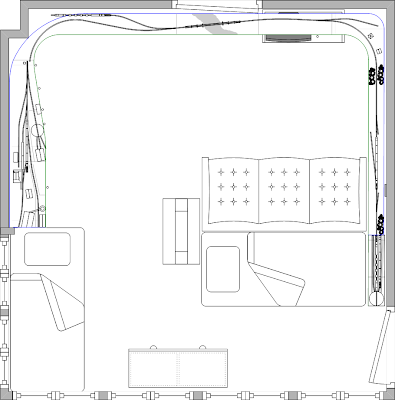 Based on bits of the real K-DR/F-M/SR-RL between Bigelow & Carrabasset, but with a slightly altered history to accommodate whatever takes my fancy.

The room does multiple duty, as my boys bedroom / lounge when they visit on weekends, and office/model building area for me at other times, as well as home to the layout.

Bigelow, on the left is a fairly faithful rendition of the trackage in the late teens, but the buildings have a definite 'Strong' flavour at least in the short term.

Salem Stream Bridge, crossing the real world doorway into the rest of the house, is in reality, just north of Kingfield, but I've moved it a few miles further north.

Carrabasset only exists on paper at this stage, but it will be easy enough to shift the staging towards the outside door in the future, and slot an additional section into the gap.
Posted by Simon at 8:40 PM 3 comments: